Famous Dutch foods you should sample at least once

16 Aug Famous Dutch foods you should sample at least once

There are a multitude of delicious Dutch foods that are a must try. Listed here are 10 dishes you do not want to miss. Foods from Netherlands are not as well-known as other cuisines, but one must try them at least once. So if you’re going to visit the Netherlands, make sure you try the following Dutch foods. If you’re going there for business make sure you translate your materials into Dutch.

Poffertjes can commonly be found in the marketplace during winter. They are tiny, soft pancakes created from yeast and buckwheat flour. These tasty treats are usually served with sugar and butter.

They are commonly served on paper plates with a small fork. Sometimes, this Dutch treat is eaten with syrup, strawberries or whipped cream.

Appeltaart consists of sweet dough around its bottom, and a lattice above. People from Amsterdam mention that the best Appeltaart can be bought from Papeneiland. Some people say that apple pie is a very American treat. However, apple pie is also as treasured by the Dutch, placing it on top of the list of 10 Dutch foods you must sample.

Appeltaart contains apple inside filled with sugared cinnamon and lemon juice. Frequent varieties of this delicious treat are called Elstar and Goudreinet, craved for their unsweetened nature.

Bitterballen are a common sight in cafes all around the Netherlands. This deep-fried wonder is battered into a crunchy layer and filled with a mix of beef, flour, spices and beef broth. They are frequently consumed with dipping mustard.

This delicious treat is a variety of sausage mixed with salt and spices. Rookworst’s casing usually consists of gut membranes, but has long been replaced with bovine collagen.

Nowadays, Rookworst is produced in factories where they its apply smoke flavor. However, the real deal is made in a smokehouse to create its natural smoke flavor.

This is a waffle cookie created with sticky syrup in the middle. They can be bough in almost all grocery stores in the Netherlands, as well as in the marketplace. Fresh stroopwafels can be bought in markets like Noordermarkt.

This is the Dutch version of a latte. Any cafe is sure to serve this drink. It is customarily served with a lot of milk, and espresso.

The Dutch like to serve this drink with a tiny cookie to savor. Also, if you like milk in your coffee, be sure to order this during your mornings or afternoons!

This traditional food is composed of raw herring fish with onions. It can be eaten with or without bread.

This can only be called Hollandse nieuwe when caught between May to July. Also, the dish is usually served traditionally, where the fish are gutted onboard the boat, leaving the pancreas behind. This allows the fish to be better preserved.

In the Netherlands, the Goudse kaas or gouda cheese is very common. Named after Gouda city, you can it at Kaaskamer van Amsterdam. This cheese is both creamy and nutty to enjoy. According to sources, gouda cheese is the most frequently consumed cheese worldwide! Lastly, you may pronounce this cheese as “how-dah” instead of “goo-dah”.

This chocolate is created in the form of a letter. It is an enjoyable delicacy that is a must-try when in the Netherlands. It can be found frequently during Sinterklaas celebration.

Licorice translated to Dutch is called Drop, and the Netherlands cannot get enough of this snack! This dark colored snack is eaten too frequently by the people of Netherlands. It was recorded that the average person in Netherlands eat more than 4 lbs per year! 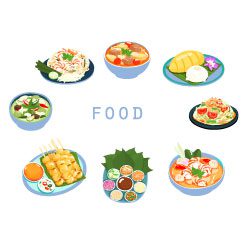 Questions? Get in touch 24/7
LIVE CHAT WITH US
Famous Dutch foods you should sample at least once was last modified: June 19th, 2020 by admin
Share
Print page
0 Likes